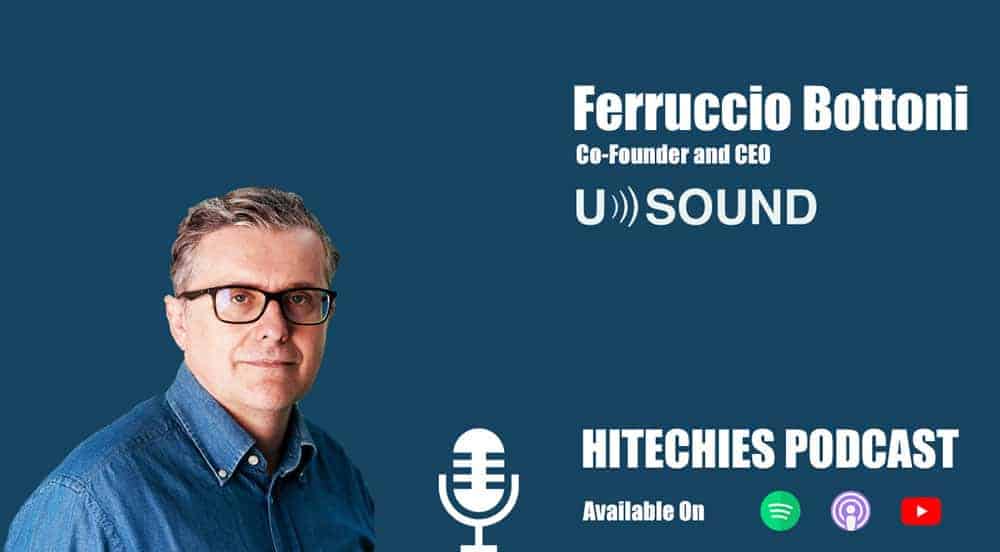 In this Episode of Hitechies Podcast we have Ferruccio Bottoni

They discuss through various topics among the following.

Who is Ferruccio Bottoni ?

Ferruccio Bottoni is Co-Founder and CEO of USound GmbH and Fauna Audio GmbH, a strong-growing Austrian high-tech company revolutionizing the personal audio field with their MEMS speakers-based products. Bottoni started at STMicroelectronics in 1995 working on developing flash memory. Subsequently, he joined Robert Bosch GmbH in 1999 where he contributed to the ramp-up of MEMS in the automotive market. He finally joined Sensordynamics in 2009 as VP of operations until 2013. During his career, Ferruccio has covered several positions including Quality and Reliability Engineer, Process Manufacturing Manager, Technical Purchasing Manager, and VP Operations. In 2014, he founded USound together with Andrea Rusconi and Jörg Schönbacher and, with a team of exceptional engineers, developed the first MEMS speaker in the market. In 2019, USound launched its first product to the market, audio glasses, under the brand Fauna Audio GmbH.

USound GmbH is a fabless company offering high-performance silicon speakers and high-quality sound solutions based on MEMS (Micro-Electro-Mechanical Systems) technology.
The vast majority of speakers still use cones and domes. What that means is that the speakers used in the best-selling audio products today are not that much different, conceptually, than they were 40 years ago.

What qualifies as a breakthrough?

Changing the way speakers operate to enhance the audio quality and improve the user experience of audio-centric consumer electronics. Old way: Originally patented in 1877, the electrodynamic speaker is a holdover from the 19th century still surviving in our 21st-century products. As one of the only two smartphones functions not having transitioned to solid-state technology, it is responsible for the lackluster audio performance of today’s mobile technology. Most of today’s wearables and hearables use voice coil speakers, essentially wired electromagnets that move a paper cone. Voice coils are extraordinarily labour-intensive to manufacture and result in bulky, fragile products.