Bitcoin halving is around the corner and it’s happening at a time when most of the world is virtually in a lockdown. Looking at the current situation and the market trend, eminently we are heading for a hard recession. The present monetary system is heading for collapse and perhaps the answer is Bitcoin and other cryptocurrency as a strong alternative to using the paper currency.In order to predict the price, we must have a foundation to make such predictions. We also should investigate the influencing factors which causes the rice and fall of bitcoin. Lets look deeper into the foundation, and segment it into two halves. The first halves is Pre- Halving and the second is Post Halving. Leading up to pre halving we are witnessing new series of events and news that can play a crucial role in influencing the price of bitcoin

At present there is an all-time high (ATH) interest for the search term – “Bitcoin Halving” – which is likely to be one key influence (of many) on these recent price surges. The increase in searches may be down to beginners trying to understand what the halving might mean for Bitcoin – with this creating a natural price increase as a result of the basic supply and demand concept. Many investors now see Bitcoin as an essential part of their portfolio. As new patterns and trends emerge, so will analysis, education and widespread understanding of the blockchain and cryptocurrency in general. When part of an asset’s value is based on historical perceptions and performances, the asset fails to compete in progressive markets, especially if the asset itself is not adjusting to the digital era.

In reaction to COVID-19, money is continuing to be printed by governments worldwide and as the upcoming financial crisis escalates, we’re seeing more people move into inflation hedge assets – with Bitcoin becoming a new favourite for many.The Fed printing money out of thin air is the fuel to Bitcoin’s fire. As the old system becomes more unreliable and untrustworthy, the more appealing cryptocurrency becomes.

Economics of supply and demand

We’ve recently seen a perfect example of this in the oil markets. Demand goes down with buyers in lockdown, while some oil powers are flooding the market with excessive supply. The result is a huge drop in oil prices. Bitcoin has the exact opposite dynamic in place: over time there will be more buyers per bitcoin, pushing the price up.

Fun fact: Credit Suisse’s Global Wealth Report 2019 estimated the number of global millionaires is 46.8 million, already more than double the number of the maximum bitcoin supply (21 million). This means that it is already impossible for every millionaire in the world to
hold one single bitcoin.

Coinbase was temporarily down on April 29th due to such a spike in trading volumes during a significant market rally. I am looking at more practical examples now is our search of toilet paper which is high and the supply of toilet paper is not adequate. #COVID19COVID-19 has sparked a surge in demand for digital payments. Uphold inc CEO JP Thieriot joins Jill Malandrino on Nasdaq #TradeTalks to discuss if this is the end of paper money.

Jill Malandrino : Have you seen a surge in demand for digital Payments ?

JP Thieriot  : Yes absolutely! Apart form it was already a trend prior to COVID, I think covid has accentuated some of the driving trends.

We are now seeing a scenario where a negative correlation is developing between the banks and cryptocurrency as their respective markets begin to decouple. As governments and banks try to remedy the global crisis by creating more liquidity, the debasing of currencies will continue.

More capital is being injected into cryptocurrency while stock markets continue to plummet. Crypto markets are showing increasing stabilization during market dumps which also suggests that a decoupling is likely developing.

Bitcoin has one of the strongest behavioural finance powers of financial markets going for it: fear and panic selling, and – in this case – greed and FOMO. Over time, this powerful dynamic is multiplied with one of the six strongest laws of persuasion: scarcity. The latter is the whole underpinning strategy of high-end, high-priced products.

What happens post bitcoin halving 2020 is anyone’s guess now, especially in the COVID-19 situation, but there are some areas we can consider. For me, the halving marks the beginning of the supply and demand equilibrium. As Bitcoin introduced into circulation halves, we can expect the price to increase (even if demand stays static) to a price point where the supply and demand cross.

“Block Halving is an important incident in the Bitcoin ecosystem, this represents the industrial side behind bitcoin as the mining industry is growing faster than ever before.”

So can we make the bitcoin price prediction based on the history of bitcoin halving ?

Will the history repeat itself?Although there is no way to accurately predict what the price will be, it is worth looking back over the history of Bitcoin to understand what’s happened after previous halvings.Following a halving, the price typically reclaims its previous ATH within 3-9 months and as a result of this upward pressure, pushes to a new ATH within 18 months. With this history in mind and in pre-COVID circumstances, we wouldn’t expect to see a major price surge, but would be looking for a slow and steady build of momentum over the next 3-9 months before reaching bull run territory again.When the halving happens, the effect of this will come on gradually but strongly. And yes, all else equal, bitcoin will in the long run experience new all-time highs because of this. In the short term, as buyers are looking to the past, the
immediate effects on price post-halving will tend to be less pronounced.
Many speculate a period of sideways or bearish action in the crypto market immediately after the halving event, but the timeline is difficult to define.

Now, let’s zoom in on the effects of mining rewards and risk management products. If we look at the last two halvings – 2012 and 2016 – we see that immediately after the halving event, the hashrate of the network fell, yet picked up in the months after.Both 2012 and 2016 saw an immediate hashrate drop post-halving (respectively 27.61 to 19.98 THash/s in 2012 and 1.56 to 1.4 THash/s in 2016), yet an improvement months later (respectively to 60 THash/s and 3.85 THash/s). For mining profitability, it’s a different story. In 2012, profitability dropped initially and more than recovered after a few months. After the halving in 2016 however, the mining profitability has decreased.

What is in the stake for Bitcoin miners with this Halving?

Both 2012 and 2016 saw an immediate hashrate drop post-halving (respectively 27.61 to 19.98 THash/s in 2012 and 1.56 to 1.4 THash/s in 2016), yet an improvement months later (respectively to 60 THash/s and 3.85 THash/s). For mining profitability, it’s a different story. In 2012, profitability dropped initially and more than recovered after a few months. After the halving in 2016 however, the mining profitability has decreased.
The bitcoin halving 2020 event will probably see many miners shut down and liquidate or sell their assets due to fear, uncertainty and doubt if it is no longer profitable to continue.Bitcoin miners can reduce the effects of this decrease in profitability by, for example, continuously evolving towards more energy-efficient hardware, moving to colder geographical areas to reduce cooling costs, and integrating alternative sources of energy (e.g.renewable energy). Some important side remarks include that

So what about the bitcoin price prediction ?

The events and context of various influencing factors as discussed above, creates a conducive environment to support the bitcoin price to rise. There are various speculations in the market from Bitcoin Gurus concerning a true value of Bitcoin post halving.Some speculate that price will go up to $11k around the halving time, post halving it will be around $13k for a while and correct. Further Bitcoin price is expected to reach $18-$20k by December 2020. The cryptocurrency market has, for the longest time, been informed by the stock market. But considering the fragility of the fiat system and global financial institutions, perhaps fear, uncertainty and doubt could be a catalyst for decoupling, where we see progressive, reliable decentralized finance informing the old system. 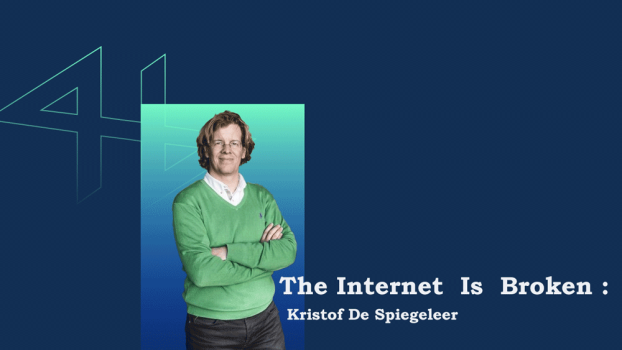 The Internet Is Broken : Kristof De Spiegeleer In Hitechies Podcast 2022

In this episode of hitechies podcast we have  CEO of ThreeFold, Kristof De Spiegeleer. He has been at the forefront of the blockchain and crypto industry for more than a decade and would be an excellent interview on the topic.  In this espisode Kristof has an interesting prespective about why Internet is Broken. Along with that he also...