The recent drop in Bitcoin and Ethereum has led to a crash in the general price of many cryptocurrencies. This crash significantly affected meme tokens, and their value of these digital assets tanked due to the crash of Bitcoin. However, you may wonder what meme tokens are.Meme coins are cryptocurrencies with zero use cases or value. Ideally, tokens without a use case offer no value to users. However, many meme coins are beginning to gain worldwide acceptance within the crypto community. As a result, many users now own and hold meme coins as digital assets and belong to a community of meme coin holders.
A perfect example of a popular meme coin is DogeCoin, a meme coin supported by tech billionaire Elon Musk. However, with the turn of the year, the crypto market has seen the rise of a new meme coin, taking the crypto community by storm. This none other than Shiba Inu token.
Due to its remarkable growth, Shiba Inu has become a worldwide sensation among crypto traders and crypto enthusiasts. As a result, this article aims to discuss in detail the amazing rise of the Shib coin. Also, this article will discuss topics like the Shib ecosystem and Shib Price prediction and compare Dogecoin and Shiba Inu. Conclusively, this article will provide a forecast for the future price of this token.

What is Shiba Inu? Shiba Inu is a meme coin created in August 2020 and named after a breed of hunting dogs bearing the same name in Japan. The founder of the Shiba Inu coin remains anonymous and is often to as “Ryoshi.” However, since it was created, Shiba Inu has been dubbed the “Doge Killer” and has seen remarkable growth within a short period.The Shiba Inu project is tagged as an experiment in decentralized unprompted community building. At its launch, the Shib token was the first digital token to be listed and incentivized on ShibaSwap. The decentralized exchanged under the Shiba ecosystem.To assure users of the legitimacy of this project, Shiba Inu founder Ryoshi locked 50% of the total supply of the Shiba tokens on Uniswap. Similarly, the founder burned 50% of the token to Ethereum co-founder Vitalik Buterin.These steps were to ensure fair distribution of the token to any person who wanted to be a part of the Shiba community. Also, these steps are in place to ensure that no member of the devs team can’t own or dump the Shib token on users when there is an increase in the token price.The coin’s founder, Ryoshi, stated in the Shiba Inu woof paper that the coin is a more-community driven project when compared to Dogecoin. Also, Ryoshi believes that the Shib token can significantly outpace Dogecoin’s value without ever reaching the $0.01 mark.Unlike top meme coin Doge, Shib tokens were created on the Ethereum platform. As a result, Shiba Inu is an Erc-20 token. According to Coinmarketcap.com, the total supply of the Shib token is 1,000,000,000,000,000, while the circulating supply is worth 394,796.00 trillion Shib tokens.As of May 26 2021, the market cap for this coin is $3,955,090,363, while the fully diluted market cap for this coin $9,958,296,939. Similarly, the Shiba token is on On 844,207 watchlists based on data from the Coinmarketcap website.At the time of its launch, the initial coin price for the Shib token was a negligible $0.00000001. 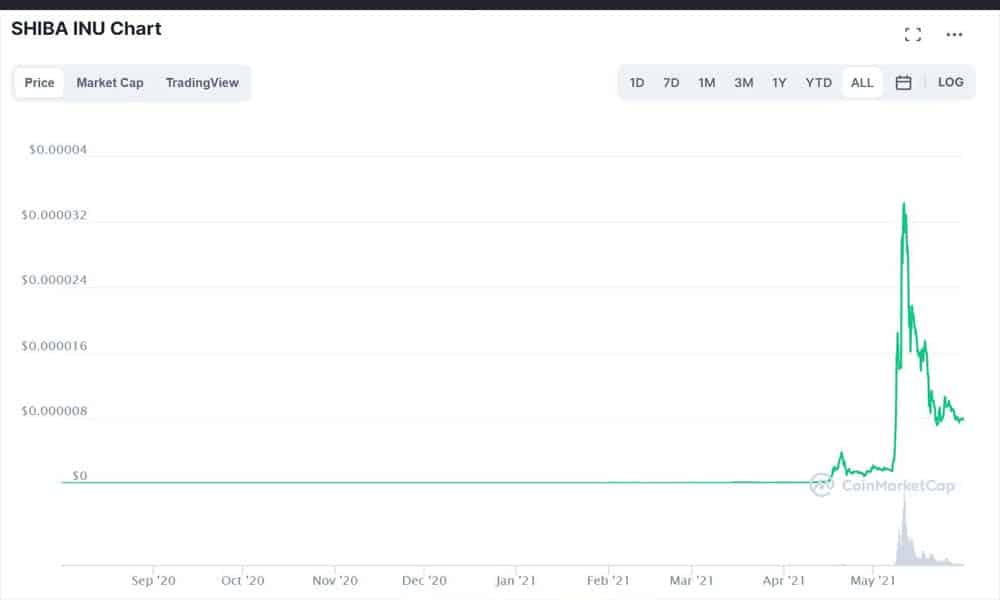 However, with the turn of the year, there has been a significant rise in the price of the Shib token. On May 11 2021, the Shib coin reached an all-time high of $0.0000388, with the trading volume of the token running into 11 billion dollars. The significant increase in value of this token is down to the worldwide acceptance of the coin and its accessibility across many crypto platforms. Currently, the Shib token is listed on several top crypto exchanges like OKEx, ShibaSwap, Kucoin, CoinBene, Probit Global, Crypto.com, Huobi, CoinDCX, WazirX, and Binance.The shib token suffered a 40% drop in value from the point of its all-time high, with the token price dropping to $0.000018. This occurred after Ethereum co-founder Vitalik Buterin donated 50 trillion Shiba Tokens to the India COVID Relief Fund. Furthermore, with the sharp drop in Bitcoin price, the price of the Shiba token dropped to $0.000009908. 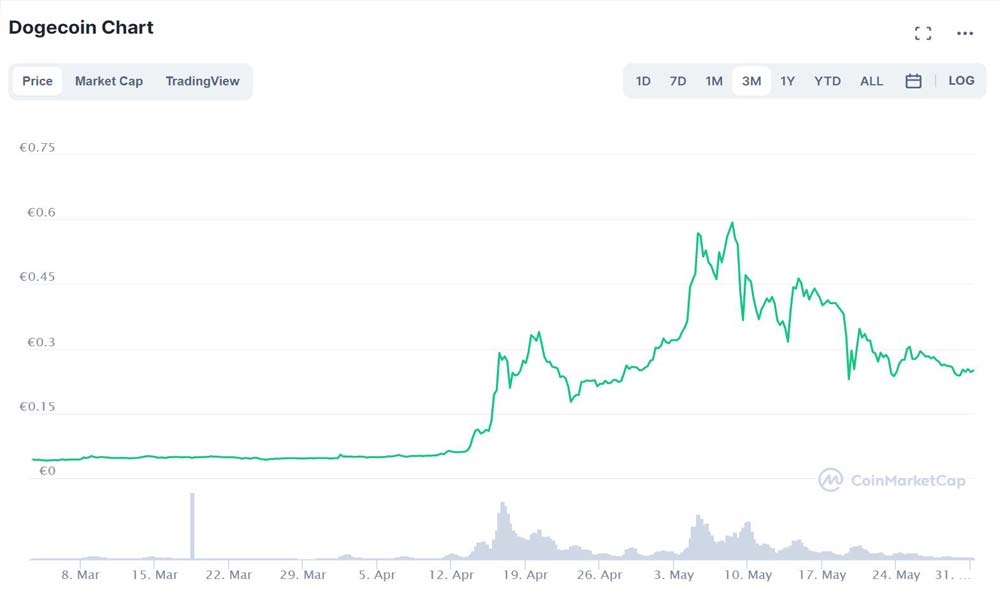 There are several differences between the Dogecoin and the Shiba Inu coin. For example, Dogecoin was built with the technology as Litecoin, while Shiba Inu was developed on the Ethereum platform. Similarly, while Doge was created as a joke, the Shiba Inu project is an experiment in decentralized spontaneous community building.
Both coins do not have a use case yet. However, Shiba Inu currently provides opportunities for members in its community to contribute towards dog animal rescue and offer a swap service for a wide range of cryptocurrencies via the Shibswap feature on their website.In terms of a total marketcap, Dogecoin presently outranks the Shib token with a marketcap worth $64 billion. However, we must bear in mind that Dogecoin has been in existence since 2013, while Shiba Inu was created in 2020. Furthermore, Dogecoin is actively supported by tech Billionaire Elon Musk, while Shiba Inu does not enjoy the support of any top celebrity.

Presently, there has been a significant drop in the price of the Shiba Inu coin price. However, this drop in value affected the coin price of all cryptocurrencies, including leading crypto assets like Bitcoin, Ethereum, and BNB Coin.However, with a new bull run for many cryptocurrencies, we expect to see an increase in the value of the Shib token. Also, suppose the token is attached to a solid project that offers modest services to users. In that case, we expect to see a significant increase in the value of this digital asset shortly.

Also, this meme token has a three other projects under its belt namely.

Overall the Shiba Inu coin price should increase significantly as long as the hype around the coin keep up. However, if the devs team behind this digital token provides users with a unique project widespread uses for everyday crypto users. Then expect to see the value of this meme coin rise significantly over time.