Despite the continuous growth of cryptocurrencies, many governments are against the trading and investment of cryptocurrencies. The Chinese government, in particular, has repeatedly warned its citizens against acquiring cryptocurrencies. Additionally, the government has put up several regulations to stop Bitcoin trading and acquisitions in the country. Among a long list of regulations against crypto assets, the Chinese government recently banned Bitcoin mining. The current ban raises many questions among crypto investors and enthusiasts around the world. Many wonder what the future holds for Bitcoin in the short term, while others question the long-term prospects of Bitcoin in light of this mining ban. While there are no fixed answers to these questions, we can look at the effects of previous bans on Bitcoin by China to clarify the future of the crypto asset. Furthermore, the events that occurred after these bans can help to determine the prospects of Bitcoin in the short term and long term. As a result, this article will review the effects of China’s 2013 and 2017 regulations against Bitcoin. The article will then conclude with a detailed explanation of why we expect a remarkable rise in Bitcoin price in the long term.

Effects of 2013 Chinese Ban on Bitcoin

In 2013, central bank authorities in China recognized Bitcoin as a digital currency. However, China’s central bank placed a ban on financial institutions from handling Bitcoin transactions. At the time, China Securities Regulatory Commission put out the notice to all financial institutions.The notice stated that bitcoin was not lawfully protected tender and that the digital currency had no “real meaning.” As a result, the China Securities Regulatory Commission banned financial institutions from supporting transactions involving Bitcoin. This ban was later extended to payment companies and third parties that supported transactions involving Bitcoin. This action negatively affected the value of bitcoin at the time as coin price suffered a sharp drop from $1242 to $480 due to the announcement.We must state that this ban was not an outright ban on Bitcoin trading in the country. On the contrary, the Chinese central bank released a statement stating that individuals could freely trade Bitcoin at their own risk. Without an outright ban on the trading of cryptocurrencies, crypto traders in China turned to foreign exchanges to provide support for their crypto transactions. This move increased holders of Bitcoin in the country. Similarly, the number of people in the country trading Bitcoin increased significantly. The continuous use of Bitcoin in China via foreign exchanges resulted in an increase in Bitcoin price by 2017. Similarly, the increased adoption of crypto, especially Bitcoin, across the globe leads to a significant increase in the coin price. By December 2016, the coin price of Bitcoin was $952.46, rising despite the Chinese ban on Bitcoin. Furthermore, Bitcoin continued to see immense growth in price throughout 2017. 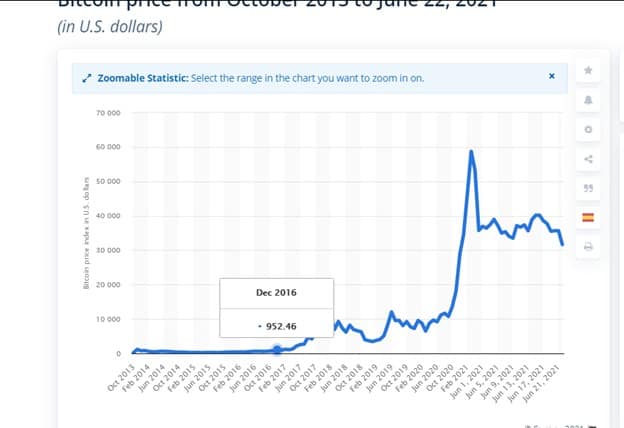 In another move against cryptocurrencies, the Chinese central bank declared a ban on initial coin offerings (ICOs). This ban was issued in September 2017 by the People’s Bank of China. An initial coin offering is a Cryptocurrency-based fundraising process used by crypto-based firms to raise money for their projects. At the time, Chinese state news agency Xinhua stated that tech firms raised close to $395m (£305m) from prospective investors through initial coin offerings.State authorities were deeply concerned about ICO’s due to a lack of regulation. As a result, the Chinese central bank declared ICO’s illegal and called for an immediate end to such coin offerings. Additionally, the authorities ordered individuals and organizations involved in ICO’s to refund investors of money raised through such coin offerings. The 2017 ban on initial coin offerings negatively affected the price of Bitcoin as the price dropped by 6% on the day of the announcement. However, this ban did not negatively affect Bitcoin price in the short term. As Bitcoin price quickly recovered, with coin price reaching $13,062 by December 2017. 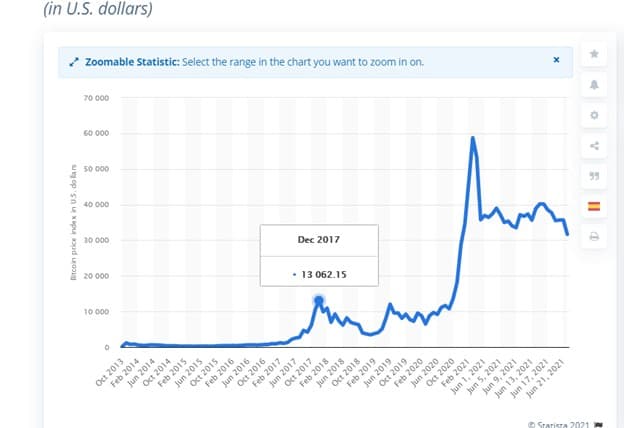 There was a significant dip in Bitcoin price for a large portion of 2018, with coin price reaching a yearly low of $3441. However, this dip is not related to the 2017 ban on ICO’s in China. Instead, the price drop occurred due to overleveraging by crypto traders, technical pullback, and many other reasons. Presently, the coin price of Bitcoin is far above the levels it sat at during 2018, 2019, and 2020. This progress shows outstanding growth over time and an increase in the use and acceptance of Bitcoin among crypto investors and traders.

In a new move targeted at Bitcoin, the Chinese government has intensified activities to stop Bitcoin mining. The current action is not new, as the People’s Bank of China charted plans to limit bitcoin mining operations in 2019.According to a report in the Wall Street Journal on the ban of Bitcoin mining in the country, the People’s Bank of China stated that bitcoin mining “consumes a large amount of electricity and also encourages a spirit of speculation in “virtual currencies.” The report also indicated that bitcoin mining strays from providing economic value to the Chinese economy. Additionally, government officials were encouraged to enact and implement policies that would make it difficult to mine Bitcoin in the country. These policies may include increased taxation on electricity for miners, tax on land use, and stricter environmental policies.

The PBOC’s dictate ordering banks to stop processing any cryptocurrency related transactions typically means banning banks from holding Yuan accounts linked to cryptocurrency companies and individuals, reducing their ability to convert crypto into fiat. We have seen a similar order from Turkey’s Central bank in the past 2 months.
This will have a 2-fold effect. 1, it will push these activities offshore into places like Japan and Malaysia and give Chinese companies even more headaches due to domestic capital controls.
It will also reduce the Chinese government’s ability to monitor suspicious transactions and therefore build a more comprehensive and accurate picture of what “illicit” activity actually looks like.
Strategically this appears to have less to do with clamping down on illicit crypto currency activity and more to do with making it difficult to use any medium of exchange that’s not government sanctioned. 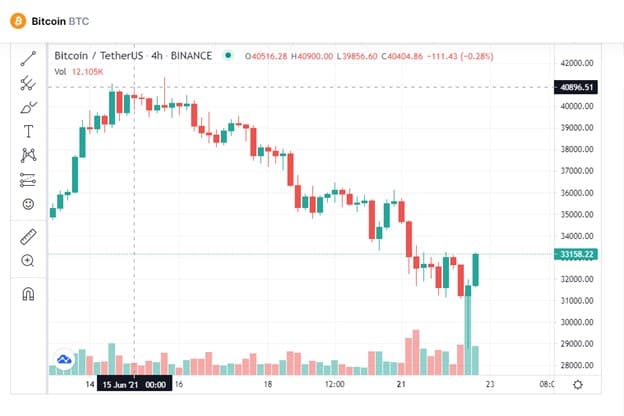 Implications of the Mining Ban in the Long Term

This ban has severe implications for Bitcoin because Chinese miners play an important role in the total supply of Bitcoin mined worldwide. Currently, China houses over 71% of bitcoin miners in the world. Similarly, in April 2019, bitcoin mining in China accounted for more than 70% of all mined bitcoins worldwide.The ban on Bitcoin mining in China has resulted in Bitcoin miners relocating to countries that offer cheap electricity and provides an opportunity to create centralized mining operations. Bitmain, the world’s biggest bitcoin mining pool, has set up Mongolia’s mining operations. Other miners have set up operations in Iceland, while many others are heading to Canada for mining operations. Many other miners plan to move to Texas, the USA, due to its unregulated crypto market, the abundance of solar and wind power, and crypto-friendly governmental stance.

The news of the crackdown in China will only accelerate the growth of mining capabilities in other parts of the world, particularly in the US.
China has formally banned cryptocurrency several times over the last few years so this news should be no surprise but this risk is not baked into the price. Far from it. Instead it’s ignored by industry vets whilst retail investors try and make sense of the news, often causing a sell off.
This should usher in a new period of mining; where companies are more selective about where they source their power from as well as set about improving their own ESG-related standards.
Mining is an industry within an industry. To be successful they must weigh up the block rewards vs their Capex and their choice of location and source of power can often be the largest determinant in how much profit they make.
We are at the stage where global mining operations are systemically important to the safe running of the Bitcoin network. Remember that bitcoin is legal tender in parts of Central America, a major trading asset on Wall St and a retail investment for millions of people around the world

This migration of miners will further strengthen the growth of Bitcoin because bitcoin miners will be evenly distributed in different parts of the world. Hence the actions of one government will not negatively affect the growth of Bitcoin. Furthermore, many crypto miners are now turning to renewable energy for their mining activities. Thus, all mining activities will be done without harming the environment.

The Chinese government has repeatedly cracked down on Bitcoin using different forms of regulations. All such regulations have failed to stop the growth of Bitcoin in the long term. Therefore, its latest policy against Bitcoin miners in its territory bodes well for the future of cryptocurrencies because miners are moving to countries with crypto-friendly views and are shifting to more eco-friendly power sources. We may continue to see a drop in Bitcoin price in the short term due to the effect of the news. However, crypto traders and enthusiasts can expect a significant increase in Bitcoin price in the long term.